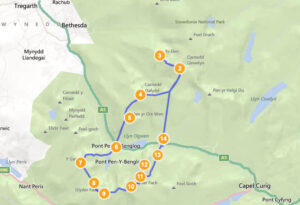 Are you ready? There are eight 3000ft peaks in front of you, enjoy them and see you at the end.

From the back of Oggie base head up hill, crossing the stream by a bridge and up to the first stile. Above this stile the ground steepens up and it’s a pull up to the skyline and a change in slope. You can now see into the cwm in front on you and you will need to cross back over the stream near to the wall at the back of the cwm. Another stile takes you on to the steep climb out of the cwm and onto the ridge.

Once you gain the ridge a right turn will bring you to a linking ridge across to Carnedd Llewelyn. You now have a choice:

At the end of the ridge and at about the lowest point you can take a faint traversing path that takes you to the col between Carnedd Llewelyn and Yr Elen. At the col carry on to climb up to the summit of Yr Elen and your first top of the day. You can then come back to the col and continue up the ridge to the summit of Carnedd Llewelyn. You second top of the day. Follow the broken wall line down making sure you are heading in the right direction back to the connecting ridge.

At the end of the ridge continue up a zig zag path alongside the broken wall to the summit of Carnedd Llewelyn (first top of the day). From here head north dropping down to a col between Carnedd Llewelyn and Yr Elen. Carry on up the ridge to Yr Elen’s summit (second top). Now retrace your steps to the col and look for a traversing path on the right which will take you back towards the connecting ridge. Along this to the main ridge line.

Take the main ridge line to the right over boulders and stones up to the summit of Carnedd Dafydd (3rd top) and the summit cairn. Along the ridge and past the big cairn at Carnedd Fach to your 4th summit at Pen yr Ole Wen. Here the route changes from previous years and you will be dropping down to the farm at Tal y Llyn . Although slightly longer this route is an easier descent and less environmentally damaging. Once down at the farm follow the path alongside Llyn Ogwen back to the car park and Brew Shack at Idwal car park.

So that’s one half out of the way. Now for the next half.

From the Ogwen car park head up towards Cwm Idwal and cross right over the outflow stream towards Idwal beach. This takes you in the direction of NE Ridge of Y Garn and it’s a steep pull up on a narrowing ridge. At the end of the ridge and just past the narrowest point turn left and up to Y Garn’s summit (number 5) to Llyn y Cwn before the scree slog up on to the slopes of Glyder Fawr (number 6). It looks like the surface of the moon.

Off now towards Castell y Gwynt. You can go around to the right or over the top, the choice is yours. The summit plateau of Glyder Fach (number 7) covers quite an area but the Cantilever stone should be an obvious feature. From here the route is changed from previous years. Do not go down Bristly Screes. This has become very eroded and unstable. At the end of the Glyder Fach plateau there are three distinct lumps of rock. One is the start of the Bristly Ridge, the scree lies to the right of this ridge. Next there is a lump of rock and to the right of this is the path you need to take down towards Llyn Caseg Ffraith. At 300 metres before Llyn Caseg Ffraith, a path (Miners path) drops down to the left and goes back towards Blwch Tryfan. At the Blwch, the summit of Tryfan (number 8) is the only summit left to do. Go on you can do it. So up to Adam and Eve, you can jump between them if you have any energy left. Retrace you steps to Blwch Tryfan and then drop down to Cwm Tryfan for the final leg back to base.

Well done. You have just done the Oggie 8!