In the British Isles, traditionally, Mountain Rescue has been performed by mountaineers, for mountaineers, and is entirely voluntary. There is no charge for mountain rescue in the United Kingdom, but that is not to say that it is free. All the expenses of rescue are covered by voluntary donations and fundraising. With the cost of modern equipment and training, operating budgets can run into many thousands of pounds. As a team, we do approximately 120 rescues per year, and the cost of running the team is £115,000 per annum.

The Ogwen Valley Mountain Rescue Organisation operates over about 150 square miles of Northern Snowdonia. It maintains a base (Bryn Poeth), and three vehicles. In an average year, the team will perform over 120 rescues, including river rescues and searching for missing and vulnerable persons in rural or urban areas.

Why is it called Treble Three? 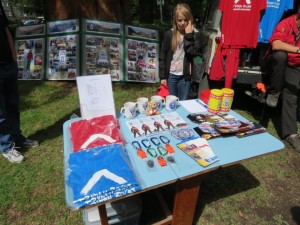 Treble Three, or more simply 333, was set up in 1997. The purpose of the group is to help raise both the profile and funds for the Ogwen Valley Mountain Rescue CIO. The enigmatic numbers were chosen as they are the last three digits of our telephone number and quite frankly they are reminiscent of 999.

By becoming a member of Treble Three you will be supporting the Ogwen Valley Mountain Rescue CIO in providing a rescue service, even if you don’t have the time, skills, experience or fitness required to be active on the mountains.

As a member, you will receive a membership card and a car sticker. Covid permitting, we aim to have a social event three to four times a year in the form of accompanied walks, bike rides, fundraising events and (hopefully very soon) the door to Oggie Base will be open on Saturday and Sunday afternoons for that just off the hill brew. Please regularly check our Events Page for up to date information. You will also receive a copy of our newsletter three to four times a year to keep abreast of all things Oggie!

We try to get your membership pack to you as quickly as possible, but it may take 4-6 weeks during busy periods.

It costs on average £115,000 to keep the team fully operational. Great expense goes on equipment and training as well as running a rescue base and two Land Rover ambulances. If appropriate, we are also able to claim Gift Aid on membership fees, enabling the team to receive an extra 25p for every £1 you give.

Why not join now and help to support mountain rescue in Northern Snowdonia?